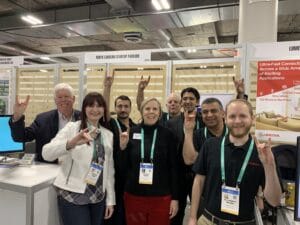 A North Carolina native,  Jennifer Capps, Interim Assistant Vice Provost for NC State Entrepreneurship, grew up 10 miles away from what would become her alma mater and career launchpad – NC State University. “I was in NC State branded diaper covers as a baby,” she told us. Little did she know that was just the very beginning of her affinity for the university, and that she would play a tremendous role in developing what is now ranked #10 Best Undergraduate Entrepreneurship Program in the country by the Princeton Review and Entrepreneur Magazine.

As an undergrad, Capps studied accounting at NC State. “People told me that would be a good career. Turns out, I didn’t enjoy it,” she confessed. Capps decided to pivot her academic career and added a finance degree to the mix, but soon after discovered she didn’t enjoy that work either. Those experiences led her one step closer to what would become her lifetime passion – entrepreneurship. Her first rendez-vous with entrepreneurship and startups was while doing some accounting work for startups while in college. She quickly realized how much she loved the startup world. Having a taste of the entrepreneurial world, she went on to grad school at NC State where she obtained a Masters in the Science of Management, focusing on Technology Commercialization and New Product Development. That’s today’s equivalent of an MBA with a Technology Entrepreneurship and Commercialization concentration.

It was during her graduate career that she also got to work as a teacher’s assistant, discovering the world of teaching – something she still loves and pursues to this day. Capps currently teaches EI 201: Exploring Interdisciplinary Entrepreneurial Thinking through University College. “I am really good at introducing students to the world of entrepreneurial thinking, helping them find their own unique path in that world and then supporting them along the journey,” she told us. “This involves teaching and mentoring which are probably my two strongest skills,” Capps added.

For almost 20 years, Capps has had the opportunity to help create entrepreneurship programs at NC State. First in the Poole College of Management and then for the entire university with NC State Entrepreneurship. Capps has been recently appointed Interim Assistant Vice Provost of NC State Entrepreneurship. In this interim role, Capps will continue to represent the organization within national and global partnerships as well as retain her current instructional and programmatic roles in addition to the interim responsibilities. “Getting to build something from the ground up is such an amazing thing” she tells us. “You’re happy, sad, excited, exhausted, energized, mad and inspired – all in 24 hours on many days. But when you’ve committed to building something, you owe a debt to those who have believed in you, so you have to show up no matter what.” She added, “in this case, the students have always been my why.”

Capps recalls that in the early days, getting a university-wide entrepreneurship program up and running wasn’t the easiest thing to undertake. “That’s what made it fun for me,” Capps said. In true entrepreneurial fashion, she confessed that she likes feeling challenged and pushed to her limits and solving problems that seem unconquerable. 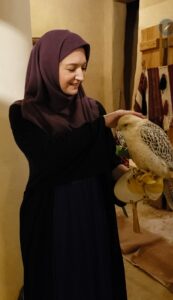 To say that Capps wears many hats at NC State Entrepreneurship is an understatement, she describes herself as a ‘renaissance woman’ and after describing her responsibilities, we couldn’t agree more. Her primary role involves teaching, curriculum development, mentoring students, supporting faculty and being a leader among her team. Her day-to-day involves representing NC State Entrepreneurship on committees and in partnerships inside and outside of the university – including travel to Russia and Saudi Arabia. Capps also enjoys working with alumni, board members, scholars, and donors. “I also have to occasionally put out fires,” she added. She is not afraid of rolling up her sleeves and helping anywhere she’s needed, “I also take out the trash some days, regularly become a printer repair person, and routinely haul supplies all around campus over all of those bricks.” She added, “it’s definitely not all glamorous, but it keeps things interesting.”

When asked what she enjoys the most about her job, she told us it’s almost impossible to choose one thing that she enjoys the most. “The students are beyond amazing!” she said, “they are so creative and they work so hard. It’s inspiring to me and it keeps me motivated to work hard.” But her students are not the only ones that work hard. “The team that I am blessed to work with is another incredibly special part of this job,” she added. “When you bring people together who all want to learn and grow together for something bigger than themselves, you have the raw materials for actual magic.  All of us, the students, the team, the alumni, the donors, the partners, we’re creating something that will (hopefully) be impacting the university long after we all retire and that’s a powerful legacy to leave behind.” She is a strong believer that a good leader models the behavior that they want to see in everyone else. “When you commit to modeling excellence among people who are already so amazing, you have to work really hard to constantly earn the right to be a leader among them, so that becomes your daily motivation,” Capps stated. 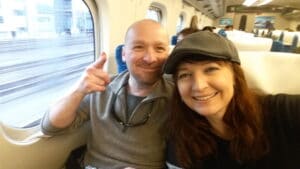 Jennifer Capps and her husband Josh in Japan

In her spare time, Capps and her husband, Josh, like to hike, take trail rides on the ATV, play with their dog and enjoy the nature and wildlife that surrounds them. She also shared that she met her husband at an Entrepreneurship event at NC State, “so this job literally gave me the best gift ever!” she expressed. Capps also loves fashion, fashion photography, and to sew, though she doesn’t do it as much as she would like to. She and her husband are also huge football fans and treat every fall Saturday as the special occasion that it is. “We schedule events around game time and make sure that we have all of the snacks one needs to keep up their energy while cheering for the Pack.”